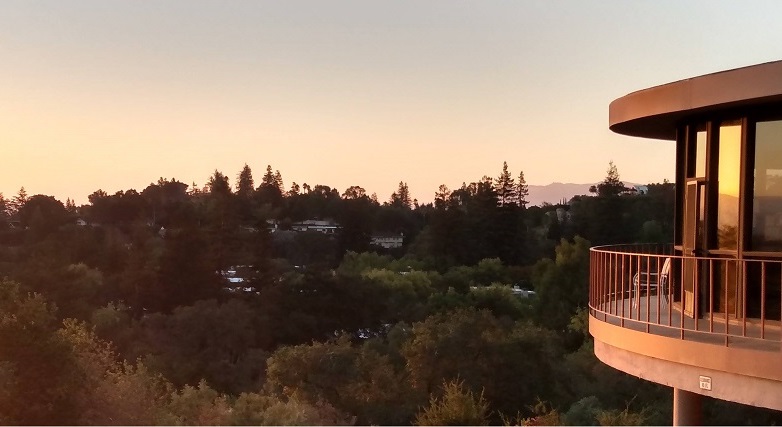 A moment on the last day of the Berrett-Koehler Authors Retreat captured the richness of this year’s event for me.

I woke up with an impulse to walk the labyrinth on the lovely grounds of the Jesuit Retreat Center of Los Altos, California.

I was in a solitary mood. Glad I didn’t encounter anyone as I made my way to the labyrinth. But I was reflecting on someone. I was thinking about fellow BK Author Don Maruska, his soulfulness and his inspiring example of service to the climate health cause.

Lo and behold, Don was in the labyrinth as I approached. Don and Don alone. The two of us walked the ancient pattern in silence.

Afterwards, we spoke as we made our way up to the dining hall for breakfast. I shared my appreciation for his path, and told him what I was up to, including my collaboration with BK Author Jennifer Kahnweiler to showcase and support “quiet men.” It suddenly struck me that Don would be a great person to interview on the subject. So over breakfast, Jennifer and I spoke to Don, who had great insights and suggestions that will advance our work on introverted men.

This encounter with Don encapsulated some of the gifts of the retreat. It was a blend of magic and matter-of-fact. Four days of building meaningful relationships, sharpening professional skills and experiencing peak, nearly mystical moments.

I don’t claim to speak for everyone in offering this assessment. I know I come from a relatively privileged, comfortable position within the BK universe. I’m a middle aged, hetersexual white man who has co-authored multiple BK books, been to multiple BK Author retreats and served as a formal leader in the community. I’m not sure whether my very positive experience was shared by others, especially first-time attendees, those less familiar with BK and folks from underrepresented backgrounds.

At the very least, I observed efforts by Retreat organizers to create a welcoming, restorative, valuable event.

This year’s Retreat offered practical, professional guidance. There were breakout sessions on topics such as earning money through online learning modules, selling keynote services, and tapping the world of podcasts. The pragmatic learning continued in the form of a presentation on the state of the publishing industry by BK President and Publisher Joanna Vondeling.

We also had many opportunities to connect, including through an opening night program led by Juana Bordas. Her “River of Life” activity brilliantly set a tone of playfulness, vulnerability and depth. In small groups, we mapped out three key points in our lives using the metaphor of a river with its twists and turns.

Then there were the “Homerooms”—small groups that met most evenings and offered attendees a chance to meet new people and share highlights and takeaways from the day. Other invitations to reflect include a walk in a nearby grove of redwood trees and journeys through the labyrinth guided by Maren Showkeir.

The annual talent show also was a highlight. Emcee Rob Jolles, in his alter ego “Johnny Fabulous,” did a fabulous job of encouraging people to perform and share from the heart even as he kept us on schedule. In his gold-sequined jacket and Jerry Lewis-like antics, Rob kept us laughing throughout the night.

We laughed, and we also cried. Some of those tears came during the most powerful moment of the retreat for me: a “fishbowl” conversation among authors of color. Juana Bordas, Majora Carter, Carice Anderson and Gerald Harris discussed challenges they faced, as well as their vision for our community and the wider world.

I gained a deeper appreciation of the burdens thought leaders of color carry. They do all the work of a white author like me as well as shoulder additional responsibilities, like serving as a mentor to members of their community. They also face higher performance expectations simply because they are, say, a black woman.

The fishbowl conversation—where we mostly white Retreat participants observed the authors of color without interruption—prompted more than one attendee in the room to break down in tears.

White people crying during conversations about race and privilege has had the effect of shutting down those discussions in some settings. I didn’t get the sense that was what happened here. Instead, the tears prompted further discussion—about frustration with injustice and systemic racism that continues and even grows stronger in this moment.

In fact, moving through the discomfort of the crying and some very direct exchanges between authors seemed to enable a kind of collective resolve to keep fighting for an inclusive world.

It also may have enabled a bit of healing.

It was in this same Bay Area retreat center six years ago that accusations of racial insensitivity created a rift in the BK Authors community. Since then, many members of the community have worked hard to learn from that painful incident–and join in the wider racial reckoning sparked by the murder of George Floyd.

As the fishbowl conversation drew to a close, I felt a lightness come over the room. We still have a ways to go at BK and beyond to build a world that truly works for ALL. But this moment of the Retreat felt like a milestone. A small measure of progress in mending a wound.

I felt that way in part because of the generosity and optimism that I heard from Juana, Majora, Carice, and Gerald. Despite the fatigue they can experience, the folks on this panel shared messages of hope. We can create a multicultural future where everyone belongs and is needed, Juana said.

Carice pointed out it may be as simple as seeing the world through the lens of abundance, rather than a place of scarce resources we must fight over.

“There’s enough sun to shine on everyone,” she said.

The poetry continued into the last day of the Retreat. BK Authors President Karen Phelan led an activity on the future of the BK Authors organization. Lots of interesting, provocative ideas surfaced, including additional efforts to recruit new authors of color to BK.

Veteran BK author Alan Briskin then offered a lyrical synthesis of the spirit, mood, and momentum of the group. Here’s his reflection:

What aspirations do I hold for the Berrett-Koehler author community and annual retreats? Why would I come?

Influencing Our Action and Doing Behaviors

A place for transformative conversations
wrapped
in a practical and pragmatic foil
of skills
both rewarding and rejuvenating.

A safe place for the audacity of our dreams,
the survival trait called hope,
the reality of our woundedness,
and the medicine called laughter.

If this was true, I could be
part of it.

If this was true, I could not help
but be part of it.

Such soulfulness, as well as abundant generosity, infused the final activity of the retreat. We stood in a circle, and one by one came into the center to name something we committed to doing after the event. Everyone else would support the person in the center, speaking words of encouragement or sending good vibes for a full 30 seconds.

A pattern quickly developed. The person making a commitment would declare their pledge and then slowly turn 360 degrees, making eye contact with everyone in the circle.

As I look back on the Retreat, it strikes me this closing ritual amounted to a variation of my encounter with Don at the labyrinth. An inversion of sorts. Instead of gaining wisdom by gradually moving to the center of a circle, the presents came from our presence in the heart of a circle. A circle of caring colleagues, all dedicated to building a world that works for all.

What could be richer than that?

Mark your calendars for our 2023 retreat!

Registration will open in spring 2023.